Obviously, each Model class corresponds to a specific database table, and an instance of a model class, corresponds a row of records in the table.

The command to create model classes is as follows:

The last parameter is the path to store model classes. There must be a configuration file model.json in the path to configure the connection parameters of drogon_ctl to the database. It is a file in JSON format and supports comments. The examples are as follows:

The configured parameters are the same as the application's configuration file. Please refer to Configuration File.

The tables configuration option is unique to the model configuration. It is an array of strings. Each string represents the name of the table to be converted into a model class. If this option is empty, all tables will be used to generate model classes.

There are two types of getter interfaces:

In addition, the binary block type (blob, bytea) has a special interface, in the form of getValueOfColumnNameAsString, which loads the binary data into the std::string object and returns it to the user.

The setter interface is used to set the value of the corresponding field, in the form of setColumnName, and the parameter type and field type correspond. Automatically generated fields (such as self-incrementing primary keys) do not have a setter interface.

The toJson() interface is used to convert the model object into a JSON object. The binary block type is base64 encoded. Please experiment with it yourself.

The static members of the Model class represent the information of the table. For example, the name of each field can be obtained through the Cols static member, which is convenient to use in an editor that supports automatic prompting.

The construction of the Mapper object is very simple. The template parameter is the type of the model you want to access. The constructor has only one parameter, which is the DbClient smart pointer mentioned earlier. As mentioned earlier, the Transaction class is a subclass of DbClient, so you can also construct a Mapper object with a smart pointer to a transaction, which means that the Mapper mapping also supports transactions. 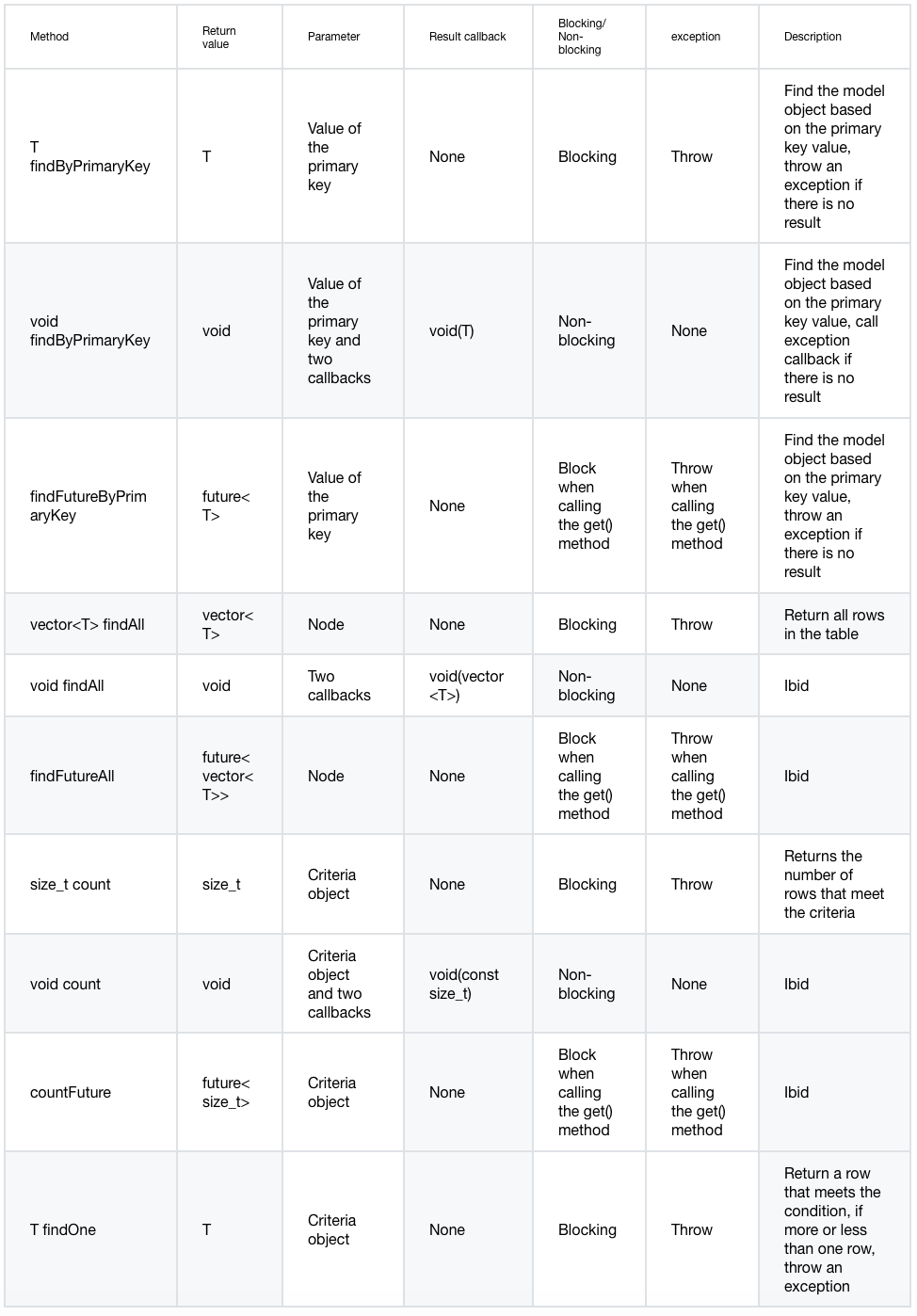 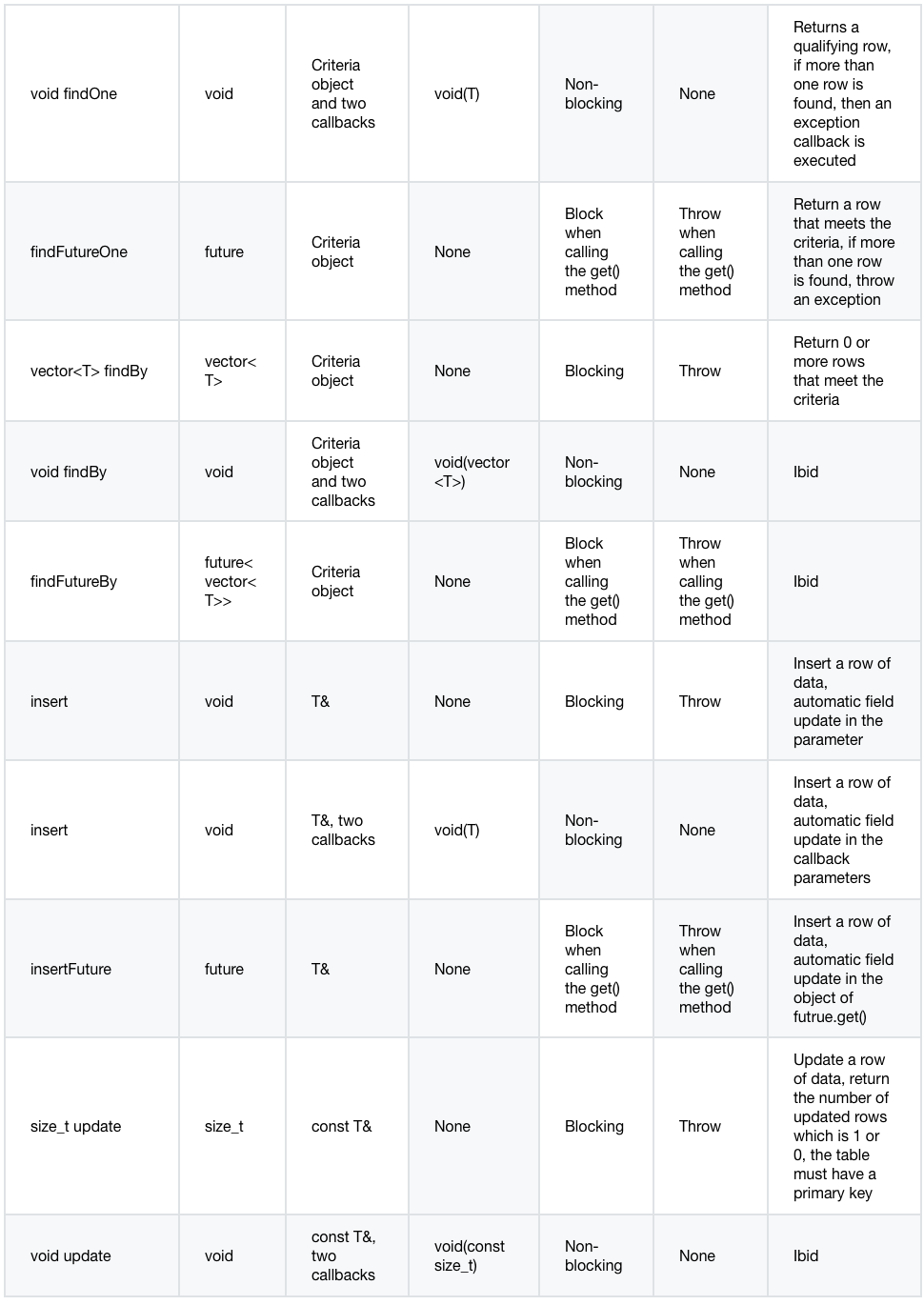 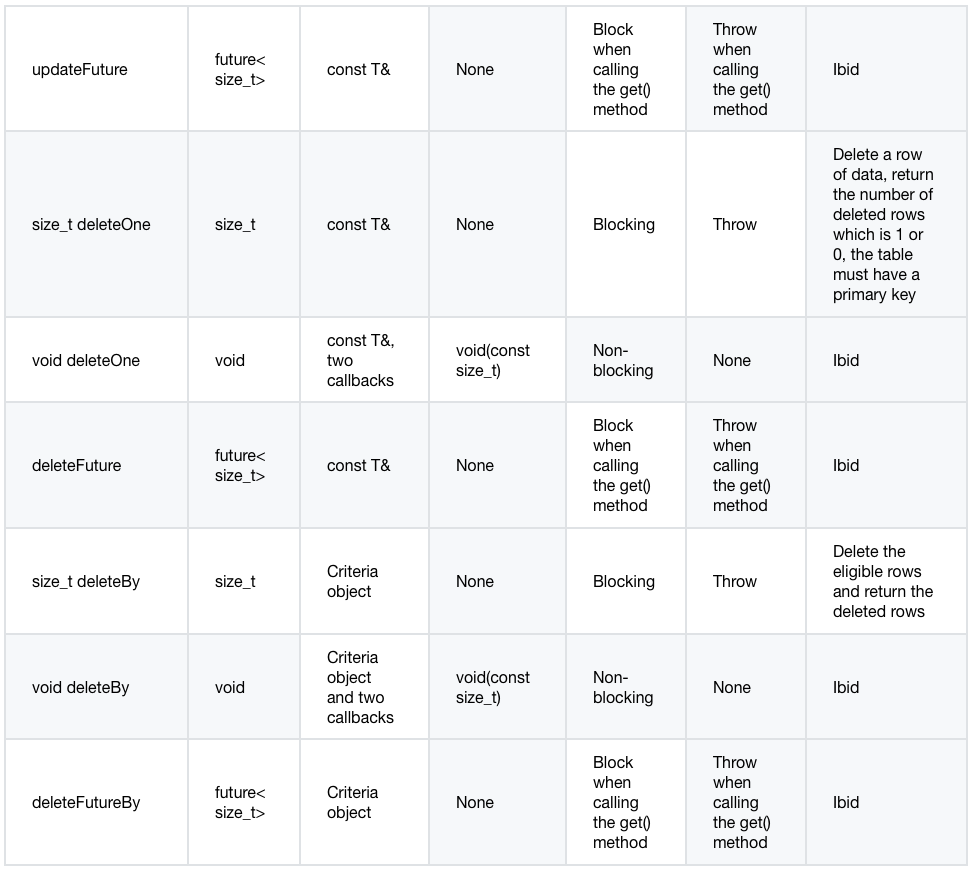 Note: When using a transaction, the exception does not necessarily cause a rollback. Transactions will not be rolled back in the following cases: When the findByPrimaryKey interface does not find a qualified row, when the findOne interface finds fewer or more than one record, the mapper will throw an exception or enter an exception callback, the exception type is UnexpectedRows. If the business logic needs to be rolled back in this condition, please explicitly call the rollback() interface.

In the previous section, many interfaces required input criteria object parameters. The criteria object is an instance of the Criteria class, indicating a certain condition, such as a field greater than, equal to, less than a given value, or a condition such as is Null.

The above example shows that the field user_id is equal to 1 as a condition. In practice, we prefer to write the following:

This is equivalent to the previous one, but this can use the editor's automatic prompts, which is more efficient and less prone to errors;

The above program is to query all the men named Smith or the women named Johnson from the users table.

Some common sql constraints, such as limit, offset, etc., Mapper class templates also provide support, provided in the form of a chained interface, meaning that users can string multiple constraints to write. After executing any of the interfaces in Section 10.5.3, these constraints are cleared, that is, they are valid in one operation:

This program is to select the user list from the users table, return the first page of 25 rows per page.

Basically, the name of the chain interface expresses its function, so I won't go into details here. Please refer to the Mapper.h header file.

The convert configuration option is unique to the model configuration. It adds a convert layer before or after a value is read from or written to database. The object consists of a boolean key enabled to use this function or not. The array of ìtems objects consists of following keys:

If the enable option is true, the generated model classes will add corresponding interfaces according to the relationships configuration.

There are three types of relationships,'has one','has many' and 'many to many'.

According to this setting, in the model class corresponding to the products table, the following method will be added:

This is an asynchronous interface that returns the SKU object associated with the current product in the callback.

At the same time, since the enable_reverse option is set to true, the following method will be added to the model class corresponding to the skus table:

The meaning of each configuration above is the same as the previous example, so I won't repeat it here, because there are multiple reviews for a single product, so there is no need to create an alias of reviews. According to this setting, after running drogon_ctl create model, the following interface will be added to the model corresponding to the products table:

In the model corresponding to the reviews table, the following interface will be added:

For the pivot table, there is an additional pivot_table configuration. The options inside easy to understand and are omitted here.

The model of products generated according to this configuration will add the following method:

The model class of the carts table will add the following method:

drogon_ctl can also generate restful-style controllers for each model (or table) while creating models, so that users can generate APIs that can add, delete, modify, and search tables with zero coding. These APIs support many functions such as quering by primary key, quering by conditions, sorting by specific fields, returning specified fields, and assigning alias for each field to hide the table structure. It is controlled by the restful_api_controllers option in model.json. these options have corresponding comments in the json file.

It should be noted that the controller of each table is designed to be composed of a base class and a subclass. Among them, the base class and the table are closely related, and the subclass is used to implement special business logic or modify the interface format. The advantage of this design is that when the table structure changes, users can update only the base class without overwriting the subclass(by setting the generate_base_only option to true).

Is it possible to model relations via the ORM Mapper API, or is it necessary to use SQL queries in this case?

As an example you could have a “categories” table and a “products” table that are related via a foreign key. Is it possible to get all products for a specific category like “Database Software” or is it necessary to create a SQL query with a JOIN instead?